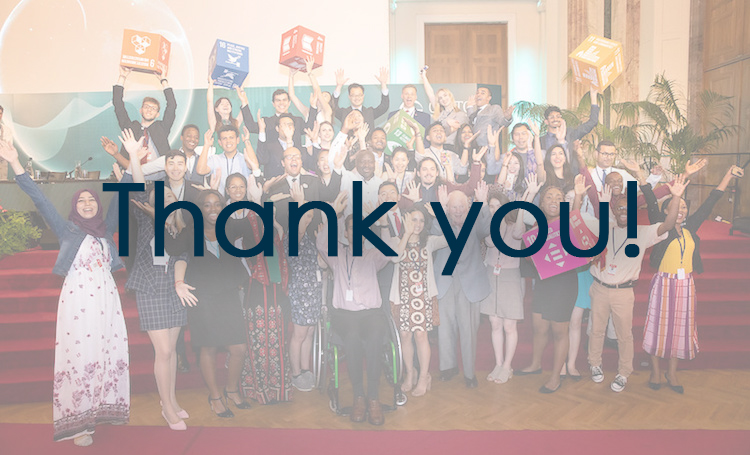 This year, thanks to you and your work, we have been able to promote the CTBT at new international gatherings and global forums and reach out to audiences and expert communities who knew little or nothing about the important role that this treaty plays for global peace and security.

In addition, the network of young professionals working to promote the entry into force of the Treaty is growing significantly, not only in size but also in geographical, gender and expertise diversity.

Please rest assured that here at CTBTO, we don’t take your efforts for granted. Rather, we work tenaciously to secure youth voices and perspective in each and every CTBTO event.

You do matter to us.

As the end of the year draws near, I write to recap what we have accomplished together in 2019, highlight some exciting policy innovations and sketch out the road map for 2020.

First on the global level, there have been some significant steps taken by the United Nations and other influential nuclear organization to make the nuclear community more diverse

Second, within the CTBTO Youth Group

The current membership stands at nearly 780 members from 100 countries. This means that we have added 200 members to the group this year alone!

Some of our regional groupings have been particularly active this year. Let me mention two in particular:

In addition, let me congratulate all CYG coordinators for the outstanding job they have done in recruiting talents and sharing information!

In 2019, CYG members have participated in the following events:

Call for Proposals for Initiatives in 2020

The next call for proposals will take place from 15 December 2019 - 14 February 2020. Please visit the 2020 call for proposals page on the CYG portal for detailed information, a link to the proposal submission form and examples of past CYG member initiatives.

In the next two months, you are encouraged to submit an idea for a meeting, workshop, event or innovative use of new technologies that you would like to organize to promote the CTBT.

To submit a proposal, the following information is required:

Proposals that meet the following criteria will be given priority:

Events in the pipeline for 2020 (others can be added depending on the proposals we receive!)

Please be sure to visit the events section on the CYG portal as other external events of relevance to the CTBT are listed there. Are you hosting an event, or know of another that's not listed? Add your event to the calendar here.

We're pleased to announce the launch of the CYG Introductory Curriculum. This curriculum provides CYG members with a centralized and comprehensive way to learn about how to make the most of the CYG membership, and important foundational CTBT topics.

All members are strongly encouraged to complete the curriculum as we firmly believe that the knowledge that you will gain will help you in your CYG, and related academic and professional endeavors.

Those who successfully complete the curriculum will be awarded a digital badge on their profile and an official certificate of completion. Please note that completion of the curriculum may be considered as a criterion for selection of members for future projects.

Thank you again for the amazing job in 2019, looking forward to an even brighter and more successful 2020! Sending warm season's greetings and a happy new year to you and your families.