In partnership with the Government of Switzerland (Federal Department of Foreign Affairs (FDFA), Division for Security policy), the Comprehensive Nuclear-Test-Ban Treaty Organization (CTBTO) launched the initiative for “Building Bridges, Nurture Partnership, Embrace Dialogue” between its CTBTO Youth Group and youth movements and organizations engaged in protecting the environment, ensuring sustainable development and advocating for greater peace and security for all. The project served as a platform for dialogue, knowledge sharing and idea generation among young leaders engaged in different social issues.

During the first phase, the CTBTO and the Swiss Government convened a Webinar among CTBTO Youth Group members that helped them gain a deeper understanding of their role in the promotion of the Comprehensive Nuclear-Test-Ban Treaty (CTBT) and design a plan to build partnerships with other young leaders engaged in different social issues.

The CTBTO Youth Group Task Force sent an email to all CYG members inviting them to register for the first phase of the “Building Bridges” project. 80 CYG member were accepted to join the webinar and 16 of them were selected to become CYG Facilitators on a competitive basis. Their role was to facilitate the discussion among the CYG members and lead the future partnerships with other youth organizations. Five CYG Facilitators Natalia Zhurina, Andrei Cursaru, Ksenia Nepeina, Cristopher Cruz and Jarret Fisher recorded video-invitations and shared them with their peers to encourage them to join the Webinar on 3 December 2020.

On 3 December 2020, the first official Webinar of the “Building Bridges, Nurture Partnership, Embrace Dialogue” project was held, and during the first part of the event the participants were divided into eight virtual breakout rooms, each facilitated by one or two CYG Facilitators. The participants took part in a discussion and storytelling session about their personal and professional reasons for engaging with the CYG and their work to push forward the Comprehensive Nuclear-Test-Ban Treaty. The purpose behind these dynamic and engaging working sessions was to establish contacts, strengthen personal relationships among the members and pave the way for the second phase of the “Building Bridges, Nurture Partnership, Embrace Dialogue” project intending to create better synergies with other youth organizations. 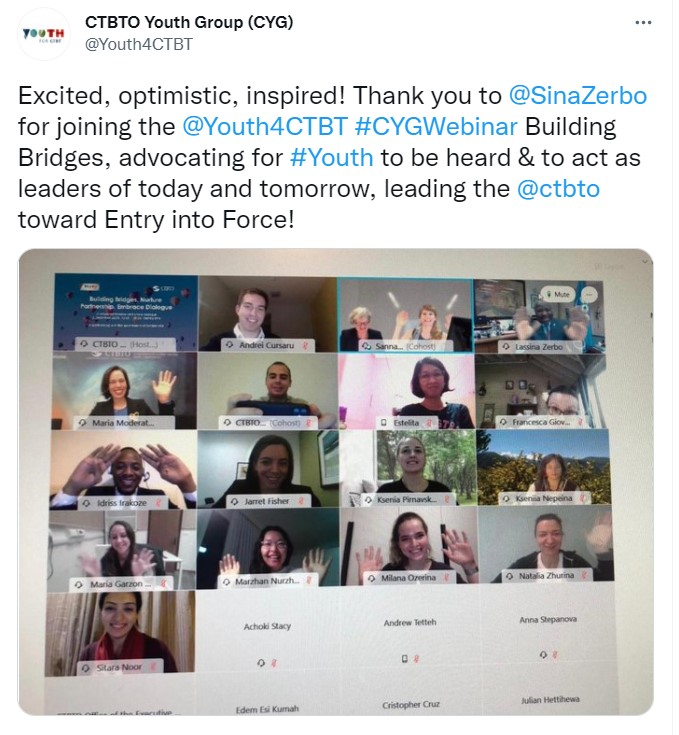 After the working sessions, the participants seized the opportunity to engage with the former CTBTO Executive Secretary Dr. Lassina Zerbo and learned about his vision of the role of the youth in promoting the Treaty.

During the second part of the webinar, CYG members were divided again into eight breakout rooms and they used the working templates prepared by the facilitators to organize their discussion on the role of the CTBT in relation to Sustainable Development Goals, climate chance, gender parity, peace and security and more. Moreover, the participants prepared a list with 46 international youth organizations that the CTBTO Youth Group could cooperate with.

The CTBTO Youth Group Task Force, reviewed each of the suggestions and selected six youth organizations: 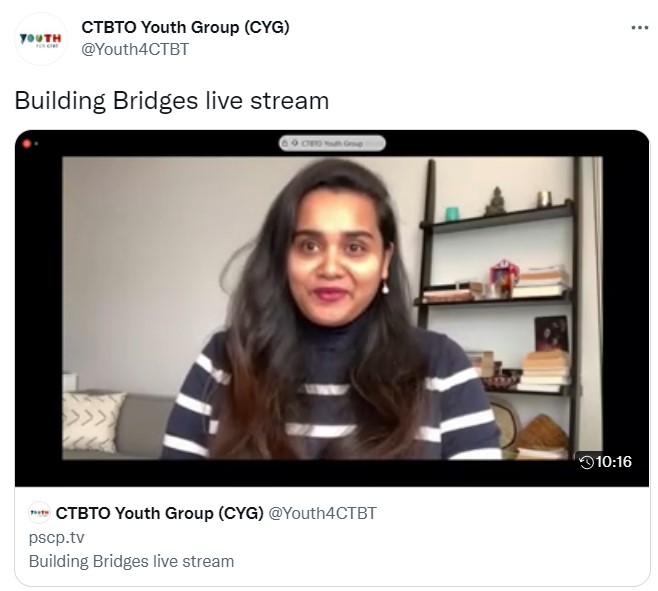 During the second phase, CYG members joined the representatives of six selected youth-led organizations and participated in six working breakout sessions with the main purpose to find areas of synergy and opportunities for cooperation. After the breakout sessions, each focus group presented their preliminary joint proposal and provided a roadmap for further developing and implementing the initiatives, that included three webinars, a research paper, a fact-sheet and a video-campaign.

The working sessions were followed by a high-level session that featured a message from the UN’s Secretary-General's Envoy on Youth, Ms. Jayathma Wickramanayake.

“By advocating for the importance of overcoming silos in nuclear disarmament, projects such as this one [Building Bridges] play an important role in encouraging young people to build bridges between disarmament and development, as well as issues such as gender, human rights and climate change,” UN’s Secretary-General's Envoy on Youth, Ms. Jayathma Wickramanayake. 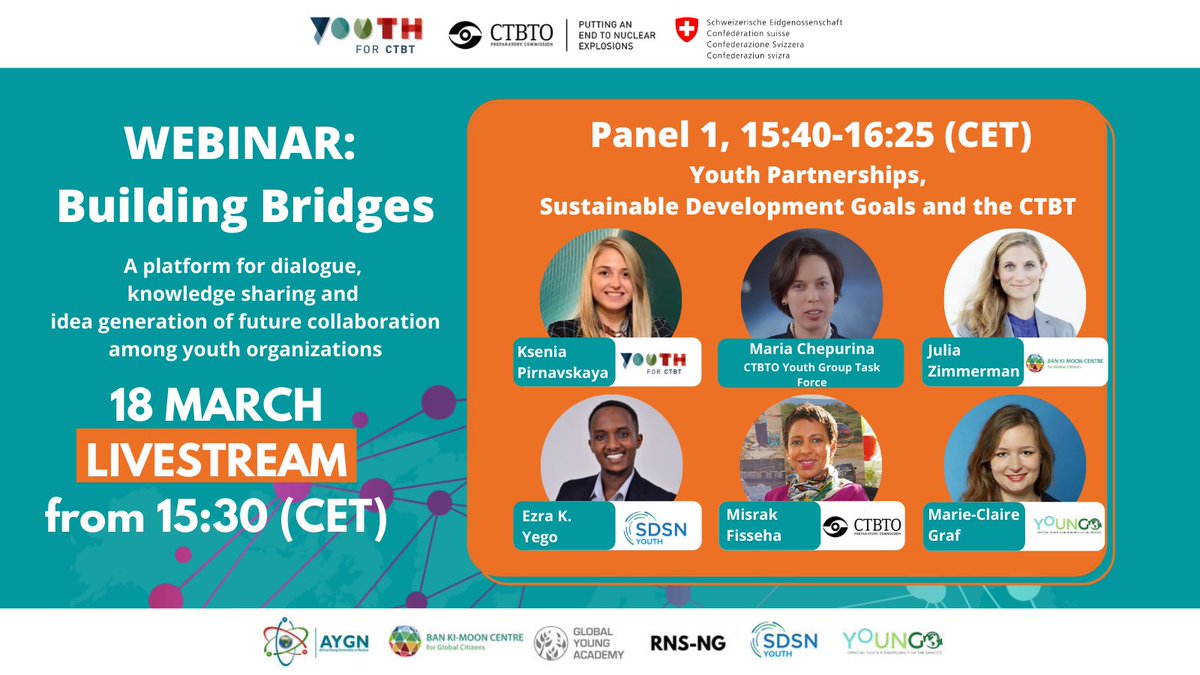 Two panel discussions followed the video-message from the UN’s Secretary-General's Envoy on Youth. The first panel discussed the role of youth on the SDGs and underlined the CTBTO’s global verification regime’s potential to offer a wide range of civil and scientific applications to significantly contribute to the achievement of the SDGs.

On 22 October 2021, the CTBTO Youth Group (CYG) together with the Ban Ki-moon Centre for Global Citizens (BKMC) organized the Webinar “Emerging Power: Women in Nuclear Disarmament and Non-proliferation” that sought to raise awareness and offer recommendations for how increased gender equality can further the disarmament agenda.

Additionally, the webinar moderated by Julia Zimmerman, Program Officer at the BKMC fostered an intergenerational dialogue on the importance of women’s role in nuclear issues, featuring both more advanced career professionals alongside young experts from the CYG.

The webinar was opened with the welcoming remarks by the CTBTO Executive Secretary, Dr. Robert Floyd, the eighth UN Secretary General H.E Ban Ki-moon and the CEO of BKMC Monika Froehler .

“This [women empowerment] is a key issue! Not only for me personally, but for all organizations working on nuclear disarmament and non-proliferation issues”- CTBTO Executive Secretary, Dr. Robert Floyd. 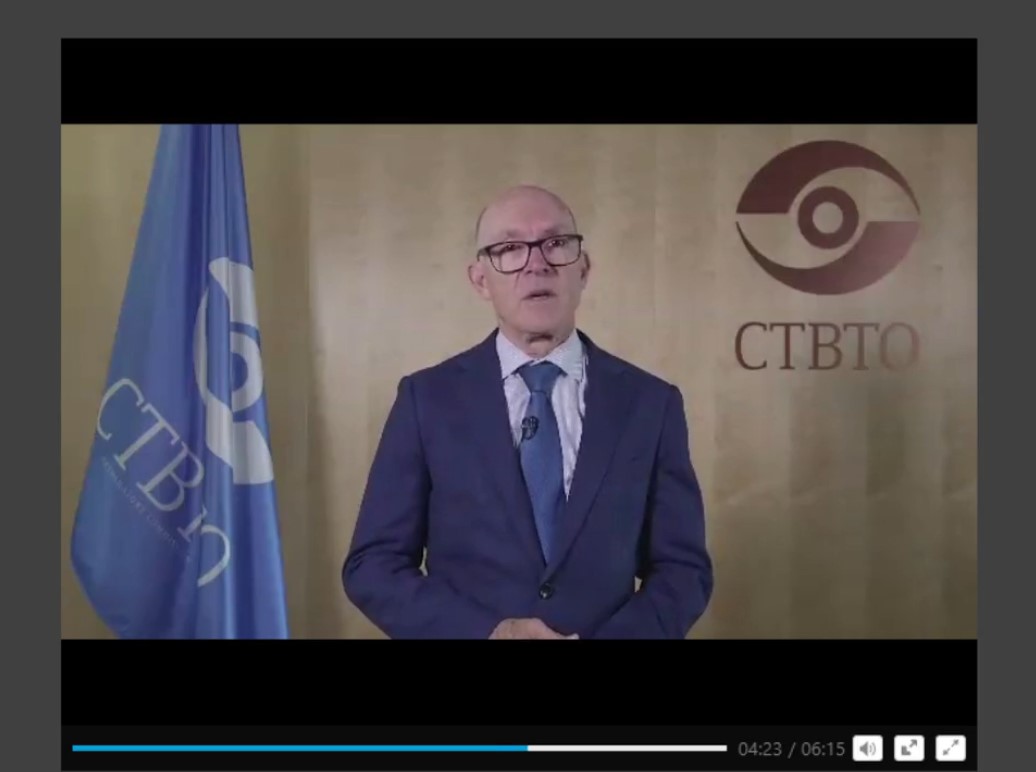 The Final Webinar of Building Bridges was held on 29 October 2021 and each of the teams comprised of CYG members and representatives of partnering organizations had the possibility to present the outcome/s of their year-long work. The Webinar was opened with the welcoming remarks by the Chief of the CTBTO External Relations, Protocol and International Cooperation Section Loipa Sanchez Lorenzo, that highlighted the importance of the energy and enthusiasm of the next generation to help dismantle the roadblocks that have persistently held up progress on nuclear disarmament and non-proliferation.

To conclude, the participants released a statement calling for increase of the involvement of young professionals from diverse fields and disciplines to advocate for the CTBT.